The John Caples International Awards, honors the best in direct and interactive marketing around the world.  Our agencies in Australia and New Zealand were very prominent at these awards last night in New York.  For the first time in Caples’ 31-year history Aim Proximity went on and won both prestigious awards including Best in Show award for its Valentine’s Day campaign for The Warehouse, as well as the Courageous Client award for its Yellow Pages work. Aim Proximity won eleven awards in total including three Gold, four Silvers and three Bronzes.

The John Caples International Awards, was founded in 1978 by Andi Emerson, a direct marketing pioneer, in order to honor well-recognized copywriter John Caples. With international chairs in 53 countries, it is funded by industry agencies, clients and suppliers; is run by industry volunteers and is judged by more than 100 active, senior-level, international creative professionals.

Aim Proximity work was certainly the big talk at the award show, with Love conspiracy consumer campaign for the Warehouse receiving Best in Show. The judges said it was due to its ability to engage buyers over a period of time and provide them with an unforgettable, extremely relevant experience – all while creating the perfect cross-sell opportunity for New Zealand’s largest retailer.

The idea was to draw in as many first-time male customers by promising them the ultimate way to impress their girlfriends or wives without having to spend any money.

The multi-touch campaign featured a ‘secret’ microsite for men only – accessible only upon completion of a “Are you a man?” quiz, e-mail messages and a live event that got the attention of both men and women. The retailer flew a plane with a romantic message reading, “Babe, I Love You” trailing behind it.

Each male conspirator was instructed to tell the women in their lives that they had arranged for the special plane. By registering with the retailer, the men could vote for the message and for where the plane would fly. Naturally, they were also given suggestions for additional romantic Valentine’s Day gifts available at The Warehouse.

For a traditional print directory business like the New Zealand Yellow Pages, the iPhone might be the last thing that you want your customers to think about.

However, Yellow sought to bridge the gap between the public perception of its brand and its ability to be the go-to online source people could use for any and all needs. 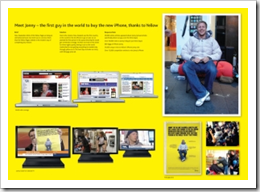 That is why the judges felt it should receive the Caples brand for courage. The brand clandestinely sponsored ‘iPhone Jonny’ to become the first person in the world to purchase an iPhone. He waited in line for three days and three nights in front of an Auckland store and received worldwide exposure for the stunt. While in line, he managed to secure food and shelter, get a proper barbershop shave, work out on a stationary bike and even host a dinner party, all the while blogging about how he secured these lifestyle assets by using yellow.co.nz. The day after Jonny purchased the phone, Yellow revealed their secret using a full-page newspaper ad.

Congrats to the Aim Proximity team for these three pieces of work;