South By Southwest (SXSW) unites more than 30,000 attendees from over 80 countries, celebrating and helping creative people from the interactive, marketing, technology, film and music industries achieve their goals.

This was my fifth year attending SXSW, and it continues to prove to me that the most unexpected discoveries happen when diverse topics and different people from different backgrounds come together.

South by in my mind remains the premier destination for creative inspiration. My previous SXSW blog posts can be accessed below;

SXSW 2017 like previous years had over 16,000 talks, panel sessions, showcases, screenings, exhibitions, mentor sessions and a variety of networking opportunities to choose from.

The key is deciding well ahead of time what larger inspiration and meaning you intend to bring back. I find the best way to do achieve this is to reach out and follow the people coming to the event who you believe you can learn from. Turning up unprepared and making decisions on the day based on wacky click bait program titles can make your day feel very overwhelming and ultimately you are not going to get the best learning experience.

My SXSW 2017 schedule for the week can be found here.

Mix Reality over Virtual Reality and Augmented Reality story telling is starting to develop, but the headsets are still not fashionable enough…..yet.

You can’t go to SXSW and not spend some time in virtual reality (VR) as it was everywhere again this year and will be for many years to come.  Each year, the gathering of tech-film-music enthusiasts highlight virtual reality/augmented reality and now mixed reality technologies that seem to be on the brink of widespread use, but never quite get there was pushed along in 2017.

I still don’t know a single person who spends an hour a day in VR. So I tend to believe VR is currently suitable for gaming and general entertainment first but if used for the brand experience I think it’s best to develop stories in Mix Reality (MR) to enhance in-store, or real world events rather than a customer being at home using a VR brand experience. This will of course change as headsets improve.

This year, for the first time in its thirty years plus history, SXSW organizers created a “Virtual Cinema,” where VR/AR content creators could show off the latest innovations at the JW Marriott. 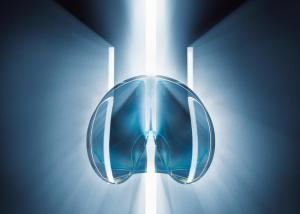 I liked the VR production from INITION, a London-based production company specializing in 360-degree and VR/AR. There were showcasing “Spatium,” a VR piece which celebrated the sculptural qualities of Philip Treacy a designer renowned for creating hats that appear to defy the possible. Maybe best known for his millinery creations for Madonna or Lady Gaga.

When seen from the front, Philip’s hat appears flat yet the more you explore, the more you find a more elaborate form. When struck with the light it appears to glow. These attributes are given scale to create a fantasy building of light and shadow where surfaces change as you navigate them.

In VR experience the hat becomes architecture where the limitations of the physical no longer apply, conjuring discovery and wonder. “Fantasy hats give you the possibility to dream,” said Philip Treacy.

Probably the best talk on VR, AR and Mixed Reality from Jake Lee-High an artist, creative technologist, and CEO of Future Colossal  based in NYC.  H is talk was titled Holens Magic Leap and Making the Mundane Magical and featured a number of Future Colossal immersive experiences produced for brands such as BMW, Showtime, JayZ, Warner Bros, Microsoft, and Citibank

He outlined some clear advantages for Mix Reality over VR. The main one is no isolation or unobstructed sight feeling safe to navigate your environment which makes it a much more human experience.

Directional speakers was also an important element and having the sound down to the ear so that you can hear the real world combined with augmented sounds.

The clear glass and being to see the real world was the most important reason why AR and Mix reality will grow as an industry must faster than VR over the coming twenty four months.

As for Mix Reality head sets there are many but the five I ried and thought the best at the momeht are listed below;

Microsoft Hololens is the best on the market, and I am a big fan of their gesture capabilities. It containing more computing power than the average laptop, no wires, external cameras, or phone or PC connection required, you can move freely and self-contained.

ODG R-9 powered by the Qualcomm Snapdragon 835 chip is cool. Like the Microsoft HoloLens, this head piece has six-degree-of-freedom tracking, so you can place digital items in real space instead of just slapping a flat overlay across the world. It’s expense at over $1,500US price but is headed in the right direction regarding a fashion piece.

is also a good device although a little ugly to look at. The Los Angeles-based startup Daqri originally developed with a specific demographic in mind—blue-collar workers. The Daqri Smart Helmet was developed to help make the lives of onsite engineers, construction workers, and technicians easier with an Android-powered hard hat, complete with an array of sensors.

has great hand tracking support and very good field of view. While on the one hand, it’s far cheaper than HoloLens at $949 compared to $3,000. On the other, its images look less convincingly real, more like a projection than a solid object. It’s tethered to a computer, not self-contained which has big limitations. 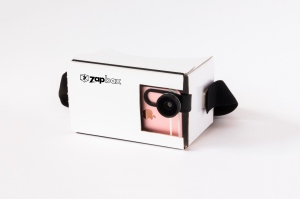 Zapbox is an impressively low-cost option. The Google card box of Mix Reality. It was originally launched on Kickstarter and an affordable way to experience mixed reality and room-scale virtual reality using the power of your smartphone. It uses the phone camera pass through to display virtual objects on top of the real world, but even more impressive is that it uses a pair of handheld controllers that let you interactive with these virtual apparitions.

The biggest advantage for Mixed Reality are the practical applications that can be developed. It will grow in use and not be just be another advanced gaming console in my mind. Instead, it will add a whole new world of interactions, apps, games and experiences we have yet to imagine.

A hybrid of both AR and VR, Mixed Reality (MR) is far more advanced than Virtual Reality because it combines the use of several types of technologies including sensors, advanced optics, and next-gen computing power.

All of this technology bundled into a single device will provide the user with the capability to overlay augmented holographic digital content into your real-time space, creating scenarios that are unbelievably realistic and mind-blowing.

A few limitation of Mix Reality (as of now) is the field of view, and this needs to be addressed but the content I saw it didn’t bother me that much once you got used to it. Sunlight is a problem, as it doesn’t work outdoors to well. Processing and battery life and of course fashion the biggest issue that needs to resolved. The manufacture that brings a fashionable earwear peice, that links to your smarphone has a hand controler capability is going to super charge the industry.

But while there are, limitations the future is bright, especially with the faster wireless transmission on its way. When you experience Mix Reality on a 5G connection it means cloud-based process and rendering will be doing all the heavy lifting.

There were many Mix Reality examples at SXSW but still the best video on the topic is the Ted Talk done from Microsofts Hololens Creator Alex Kipman.

Digital off screens and into real world items are moving fast and becoming practical and fun experiences for creative ideas.

When you see digital tech beginning to integrate into real world items as well as becoming fashion wearable you can start to see how our digital lives are on the edge of another radical shift; new forms of technology are decoupling digital functionality from consumer electronics.

Connectivity and digital interaction are being integrated into those familiar objects from hats to clothing, furniture, cars, buildings – creating the opportunity for seamless, discrete interactions that reduce our reliance on any single device.

Google ATAP Technical Project Lead Ivan Poupyrev and Levi’s VP of Innovation Paul Dillinger talk Beyond the Screens: the Ubiquity of Connectivity spoke about moving beyond smart gadgets to a future when our entire world is intelligent and interactive.

They went deep into the Levis and Google partnership and what they learned developing the Project Jacquard platform.

Called the Commuter, which uses Google’s Jacquard technology to turn its denim fabric into a gesture-controlled canvas.

On the talk, Google and Levi’s revealed that the smart trucker jacket will arrive this Autumn in the USA for $350. The Commuter comes with a Bluetooth cuff that pairs with a smartphone to let you get directions, adjust the volume on your music or answer a phone call — all triggered by finger swipes on the jacket’s fabric. Some people said it was the Google Glass of jackets. I think it’s a much better attempt of focusing on fashion first over tech.

Another interesting talk on digtial in the real world items was “Making Music Physical Again” by Dr. Kate Stone from Novalia.

She is a creative that adds interactivity in the form of touch and Bluetooth to printed surfaces. Kate talked about being physical again, the fusion of physical and digital requires a focused design service skill set to create immersive interactive experiences.

Kate spoke about the power of physical print with a musical digital soul and went about sharing stories of these achievements and put forward a vision for the future of interactive experiences with everyday things.

For example, McDonald’s turned their placemats into music production tools, Bootsy Collins played bass on a paper note book and Budlight turned a wall in Brazos Street into a 50 ft long musical experience at SXSW all using her inventions.

The world’s first working DJ turntables made from a pizza box using grime DJ P Money and Rinse FM’s DJ Vectra. Despite being made mostly out of cardboard, the box features two decks, a cross-fader, pitch volumes, cue buttons and the ability to rewind music.

The playable DJ decks also sync via Bluetooth to the user’s smartphone or laptop with DJ software such as Serato. Using conductive ink, users can mix, scratch and release their inner DJ by tapping and sliding their fingers over the controls.

To make your dreams you had as a child come true requires passion of course, but you also need to be one step ahead of today’s technology and consumer trends.

Fresh off the successes of “Rogue One: A Star Wars Story,” director Gareth Edwards gave an SXSW keynote to discuss how he got his start in filmmaking. In a very powerful, funny, and above all inspiring talk, Edwards recounted, step by step, how he went from for-hire VFX artist to his awesome 2010 feature debut Monsters and from there into a galaxy far, far away.

As a kid, Gareth had a dream he wanted to join the Rebel Alliance and destroy the Death Star like the heroes in the movie, but soon learned that this was impossible. Or was it?

Zane recapped his life, career and musical philosophy that was crisp, polished as well as a great example of how to do a talk aided by video stills and plenty of musical snippets.

Lowe told the packed room that he “never had a choice” about going into music industry; “It was my passion”. It may have been his passion but how he went from a kid in Auckland loving his first album from Tom Petty & the Heartbreakers’ to the heights of the music industry was his ability to read the trends in technology, and now it impacted his industry of his career choice.