In New Zealand, Mountain Dew is still in its infancy with only one national advertising campaign pre-dating this.

Building on Mountain Dew’s association with extreme sports, the agency mixed their three electric-themed flavours with skating and came up with an audacious idea: A pinball machine you can actually ride.

But the intention wasn’t just to create an ad. Colenso were going to make real skaters the ball in a world first skatepark, wired with sensors, sounds and lights, to score your run just like pinball.

The park had to look like a real pinball machine but also had to be good for skating. That challenge fell on Corban Walls (Remain Industries) who was the man behind the architecture of the park.

Corban designs skateparks for the NZ Nationals and sets for films such as Avatar, so the agency knew he would understand the logistics of making the park work from both an aesthetic and practical point of view.

Brendon Reid (Automation Associates) and his team were then tasked with making the machine function. This involved installing and programming hundreds of sensors, sounds and lights as well as the huge L.E.D screen on the backboard.

Colenso gave the job of designing the look of the park to Mark Ward, a UK-based graphic designer known for his unique Americana inspired street-style graphics.

Lastly, the agency enlisted the help of three Mountain Dew Ambassadors, Haimona Ngata (BMX) Brett Band (Skate) and Mike Bancroft (Skate), who fronted the campaign in a video blog throughout the build and launch of the park.

After months of planning, the 600 square foot skatepark got underway and took approximately one month to build. No detail was left undone, with a 13 metre high backboard, bumpers, flippers and plunger. There were even zones dedicated to each flavour. 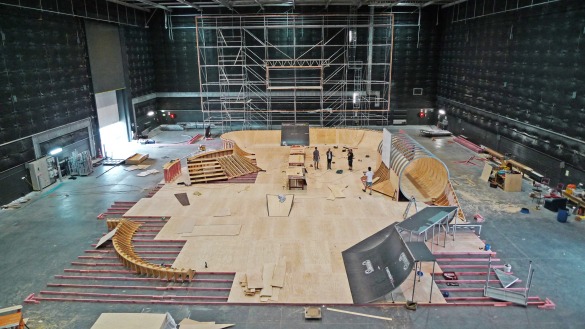 On 4th June 2011 the park opened to the public with an invitational skate competition with 30 of NZ’s best skaters. A TVC also ran on National TV, promoting the three flavours and the opening of the park.

Colenso also created and launched a website where people could explore the park, sign up for individual runs and share 360 degree, Matrix-style images of themselves mid-trick.

So far the park has been featured on over 100 international news stations including CNN World Report, not to mention hundreds of websites and blogs. Even Tony Hawk has tweeted about it.

There’s no doubt that this has already been a great success and Mountain Dew have had fantastic feedback from the skating community. But the nostalgic-retro aspect of the idea seems to have appealed to a much broader audience and age bracket, not to mention pinball enthusiasts everywhere.