Colenso BBDO, in conjunction with PEDIGREE, has created a campaign using facial recognition software to connect homeless dogs to their human doubles.

The state-of-the-art interspecies comparison software analyses your facial features and compares them with a nationwide database of real dogs looking for adoption.

A 2004 USCD study found that when people choose a dog, they seek one that resembles themselves. The study concluded that dogs are actually more likely to be chosen by a person who shares similar features.

So in early 2010 Colenso began work with facial recognition experts, NEC to develop Doggelgänger – a human to canine pairing software, designed to connect real homeless dogs to their human doubles.

PEDIGREE’S global positioning is ‘We’re for dogs®’ and central to this is the PEDIGREE Adoption Drive.

Every year, the Adoption Drive offers support to thousands of abandoned dogs across New Zealand. Now in its 3rd year, MARS New Zealand asked Colenso BBDO to come up with an idea that would open the door to more dog adoptions, hence the Doggelgänger idea being born. 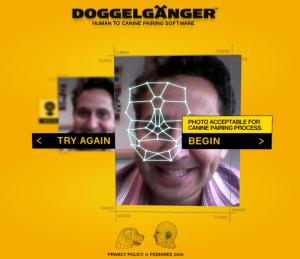 “The PEDIGREE Adoption Drive is a key part of the PEDIGREE brand. In early 2010 we gave Colenso the challenge to help us develop an idea around this initiative for us that would help engage consumers with the campaign more, encourage consumers to adopt dogs and help us to help dogs find a better life. We were immediately taken by the idea and saw it as a strong fit to the campaign and one that we believe will take the campaign forward in 2011”, Pete Simmons, Marketing Director, MARS NZ.

“I love the fact we’ve used facial recognition technology to connect real people with real homeless dogs at shelters around the country. There’s a truth out there that people look like their dogs, so creating software that gives everyone a chance see who their ‘Doggelganger’ is is not only awesome but it’s for an incredibly good cause.” Aaron Turk, Digital Creative Director, Colenso BBDO.

By connecting a real person to a real homeless dog, Colenso has helped PEDIGREE create a hugely personal experience. One that will give homeless dogs across the country the very best chance to set up that vital first meeting in the journey to finding a new home.