Tribal DDB won the major award for ‘Best Use with Radio’ and won the Highly Commended award in the overall ‘Best Integrated’ category.

McDonald’s ‘Cool Train’ campaign objectives were to communicate the summer New Tastes Menu range in such a way that was visually engaging and encouraged viewers to actively interact with the brand. With a TVC featuring a covert phone number on a fast moving train, curious viewers could phone or SMS to get more information. They were then directed to "unlock" a secret website, whereby participants could apply for the opportunity to feature in a future McDonald’s TV commercial. A nation wide search began as talent applications flooded in for the opportunity to feature in a TV commercial. The final candidates were selected and featured in the April "Ragin Cajun" Burger TV campaign. The TV campaign was further supported by Nova FM, who actively promoted ‘Cool Train’ on air.

This is a great indication of the kind of work Tribal DDB performs that is ‘beyond the website’. It was very exciting working with McDonald’s on developing a hidden ‘easter egg’ into a TVC to create another level of involvement with the brand and the communication message. It’s now clear that the combination of channels including TV, radio, SMS and the web worked really well. The whole team is really proud to have won these awards.

Photo from the awards night 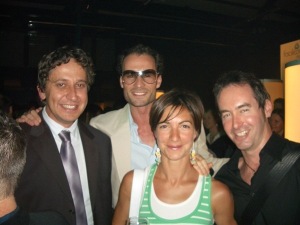